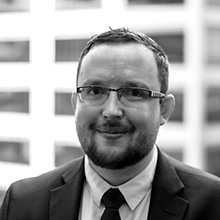 Tyler Anderson is an associate with Capstone Law who focuses on complex motions, writs, and appeals. Before joining Capstone, Tyler was Co-Director of the Los Angeles Center for Community Law and Action (“LACCLA”), a nonprofit law firm that represents tenant unions and union organizers. While there, Tyler tried a disparate impact federal Fair Housing Act case that resulted in a jury verdict of over $1,000,000. He also frequently used California Anti-SLAPP laws to block attempts to silence tenant union organizers. Prior to working at LACCLA, Tyler clerked for the Honorable Martha Vazquez, a federal district court judge for the District of New Mexico who, at the time, sat on the Executive Committee of the Federal Judiciary. Before that, Tyler was a litigation associate at the international law firm Jenner & Block LLP.

Tyler has published articles in the U.C.L.A. Law Review and the Harvard Journal of Legislation, as well as two Op-Ed pieces in the Los Angeles Times. Tyler has also served as a guest lecturer for a graduate seminar at the UCLA Luskin School of Public Affairs, as well as appeared on the television program “Inside the Issues with Alex Cohen”, which covers news in Southern California.

Tyler graduated from Harvard Law School, where he was the Executive Articles Editor of the Harvard Journal on Legislation as well as President of one of the largest student-run pro bono organizations at Harvard University, Project No One Leaves. He graduated with several “Dean’s Scholar” prizes for receiving top grades in his constitutional law courses. Tyler is admitted to practice law in California and before the United States District Court for the Central District of California as well as the Ninth Circuit Court of Appeals.